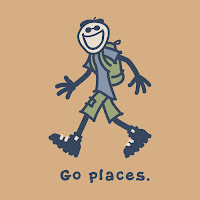 Please note that this blog is moving to:
https://globetrottinggrandparents.wordpress.com

Please go to the new site and click 'follow' to receive all new postings and travel along!

Thanks for your interest.
Posted by Margriet at 12:32 PM 2 comments:

Volunteering: To Pay or Not To Pay

That is the question, asked by fellow globetrotter Steph Dyson who is currently working in South America. I like her blog because it is informative and interesting. Not all about "what I saw and did today"...
Her latest blog is about whether or not paid volunteerism is a good idea.
Steph did not only share her own thoughts on this, but asked several experienced volunteer/travelers. I enjoyed reading their collective comments:

The long and the short of it is: it CAN be OK to pay, but it can also be perfect NOT to pay... It depends on the organization. You need to do your research and then decide what works for you personally.

Housesitting Around The World 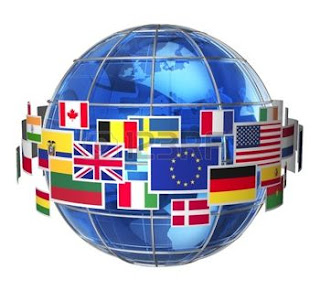 If you are interested in traveling but not living in campgrounds, hostels or hotels, here is an alternative. I enjoyed this article on the Lonely Travel site, complete with helpful links:

Happy travels!
Posted by Margriet at 6:24 PM No comments:

Check out this article on Intrepid's new initiative to travel while helping others:

http://www.travelweekly.com/Travel-News/Tour-Operators/Urban-Adventures-launches-social-enterprise-tours
Posted by Margriet at 2:13 PM No comments:

What I love about traveling to a place I have never been to, is this: it is like taking a blank, new coloring picture. The outlines are there but nothing else. You can color it in any way you like... When I go to a country I have an idea of its outline. But the colors come once I see it for myself. Once I get to meet people, taste food, smell the food, see the scenes - then the outlines takes shape and transform themselves into the real picture.

Did You Know This About Ethiopia?

When Kees and I got engaged, over 40 years ago, we spent a few days in South Limburg, our favorite part of The Netherlands. One day we were hiking along a narrow path lined with brambles.
Through the greenery we spotted a huge, very unique house.
We peeked through the blackberries and saw a red tile roof over a wide veranda with many arched openings. On the veranda, in wooden reclining chairs, were men reading.

Later we learned that this house was called Emmaus and that it belonged to the Catholic church, specifically to the cloister of Wittem. The priests came here for a day off, to rest, to read and the contemplate. One of the priests, an Italian architect, had designed the building. And many priests worked on the construction in the early 1900’s. The building really only consisted of one large room surrounded by an enormous wrap-around porch and a second story that was open on all sides serving as another porch.

Over the years, we often came back to this exact spot and we never failed to take a peek at “our” ghost house as we called it. It seemed bleak and deserted for many years and we often dreamed about what it might have been like if we had not emigrated to Canada and what if we had bought it and renovated it and ran a B & B here….?

During our previous visit to the area, perhaps a year ago, we noticed there was construction going on. The house was being renovated!

This time around, I googled for the house name: ‘Emmaus’ and discovered that the building was now privately owned, renovated and used as a small, exclusive meeting place for business leaders. I contacted the manager to see if, by chance, there was a restaurant so that we could finally see this building inside. There wasn’t.
However, because she liked the idea that we had been drooling through the hedges for so many years, she kindly invited us for coffee. And that is why, after more than 40 years, we got to see the house that has become so special to us. It is gorgeously renovated to modern day standards but preserving the old features: a grey stone floor, the arched windows, the enormous wrap-around porches. The old wall paintings that once flanked the altar are preserved under a thin layer of new walls. The ceilings are still towering and candles everywhere present a still serene feel to the house. It was so nice to be able to walk around without feeling like a spy! And we still wonder what might have happened to us and to that old house that we fell in love with so many years ago….

'Hold fast to dreams,
for if dreams die,
Life is a broken-winged bird
That cannot fly.'   - Langston Hughes 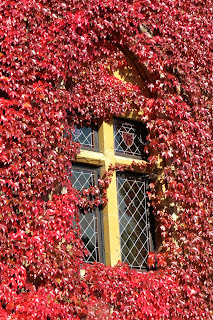 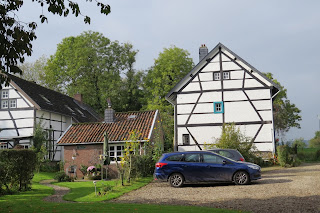 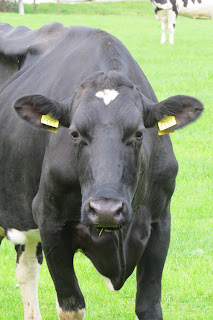 Southern Limburg, the most southern tip of the most southern province of The Netherlands, is legally Dutch. But it’s landscape and atmosphere are more Belgium, with a hint of French and a dollop of German mixed in. It’s my favorite part of the country.

The architecture is typical: white stucco houses with dark wooden beams showing on the inside and out, usually with window boxes with cascading red geraniums under each window. The land here is not flat but very hilly. Gorgeous rolling hills of pastures with cows, interspersed with forests and tiny villages. Each village has a medieval look: narrow crooked streets lined with houses that lean in a tight circle around a pointy church. Sometimes the streets are so narrow that I was sure we were driving on a bicycle path but it always really was the street - just wide enough for the horse and wagon that used to come around the bend not long ago. 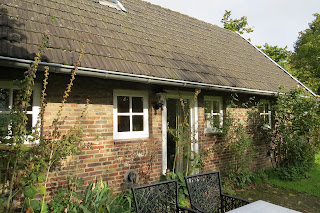 We found a lovely little house to rent - a small brick building with a kitchen, tiny living room with fireplace and a small bed- and bathroom. Perfect for a week of hiking and writing.
I had wifi and a kitchen table so I happily worked away on overdue manuscripts and tedious editing. In the mornings I dropped Kees off at the spot of his choice from where he would hike that day. He savored these hilly hikes through foggy farm land and picturesque forests.

We’ve been so lucky: in nearly 3 months we had 3 days of rain.
We spent one lovely sunny Sunday hiking for the local ladies’ choir. They had organized a fundraiser walk. We enjoyed seeing many other hikers trudging among the cow patties. 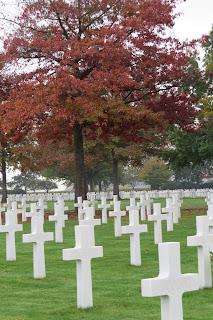 One morning I noticed I was driving right by the American Military Cemetery of Margraten so we paid a visit. The rows and rows of white crossed under bright red and yellow fall colors, were touching. To read the names of thousands of young American boys, who came from so far to help liberate a country they didn’t know…. It is a humbling and touching experience. Especially now that thousands of refugees are arriving in the country, many of them escaping war. When will we ever learn?